It’s ice cold outside in Ljubljana, but we’re among hundreds of people walking the streets. At the foothills of the snow-capped Alps in the middle of winter, you’d expect people to be huddled around fires in the warmth of their homes. But it’s exactly the opposite.

Slovenian women pass by in thin cardigans, high heels and miniskirts, both poised and relaxed, and laughing with unrestrained exuberance. Men gather round tables outside restaurants, giving boisterous toasts and back slaps, despite the large number of empty tables available inside. People are talking comfortably and jovially, bringing life and fire to frigid temperatures under a star-speckled sky.

I try to thicken my skin and mentally warm myself up. I try to match the nonchalance of the people and the fortitude of the mountains that surround them. I try to pretend that I’m not a wimp from Florida.

But my fingers keep going numb and snot icicles are forming at the tip of my nose. My body is uneasy in such conditions and reacts to each gust of biting with tensed muscles and ripples of goosebumps. I’m thinking: How do the Slovenes stay warm? What’s their secret?

“Are you cold?” I ask Filip, a self-proclaimed village boy from the mountains. I wanted empathy, hoping the geography of my birth hadn’t predisposed me to eternal winter fragility.

“Freezing,” he mumbles from beneath the scarf he’s pulled up to his nose. He grabs me a little tighter.

Ljubljana, the capital of Slovenia, is a place I never thought I’d be. The inspiration to travel here arose as it usually does, with a beautiful photograph that I can’t stop thinking about. With a population of only 200,000, it’s one of the smallest capitals in Europe. But, to me, it’s the perfect size. It feels humble, convivial, and intimate.

The next morning, on one of my many natural remedy quests, we are on the hunt for oregano oil – a task I hope will be easier than in the Czech Republic, given Slovenia’s proximity to the Mediterranean. We scan shelves and wander in and out of local shops, but can’t find it anywhere. Then, we notice a red door that’s cracked open down a narrow cobblestone road and a man with honey-colored skin beckoning us in.

“Hey guys, what are you looking for?” he asks in English. He bounces while he walks to greet us, as if little springs were fastened to the soles of his shoes. I’m wondering what about us led him to believe we weren’t locals.

A few seconds of small talk and we determine that this shop, too, does not stock oregano oil. Then our new friend Rodrigo, who’s Spanish, unexpectedly offers: “But we do have liquor if you’d like some.”

It’s not yet two in the afternoon. Filip and I look at each other with the expression of two kids that have been told they can stay up past their bedtimes. Yes, we nod, We’d love some.

Huddling around a small altar in the back corner of the shop that seems to exist solely for us in this moment, we watch as he pours the clear liquid into crystal glasses. Slivovka. No sooner had we toasted with a na zdravje than Rodrigo started spilling the details of what led him to this country.

“I have a wife and two kids, but Slovenia is my one true love. I will die here,” he says, with a big grin on his face.

And this sets the mood for the next three days in the tiny capital. They are frenetic. They are festive. They are filled with dancing and singing, the clash of quiet cobblestone streets and jubilant voices echoing off graffiti plastered walls. There are Christmas lights and castle lights and warm, cozy feelings. I almost forget about the cold.

In the town square 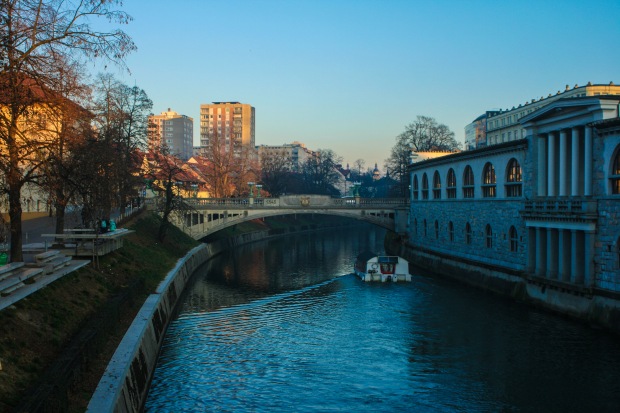 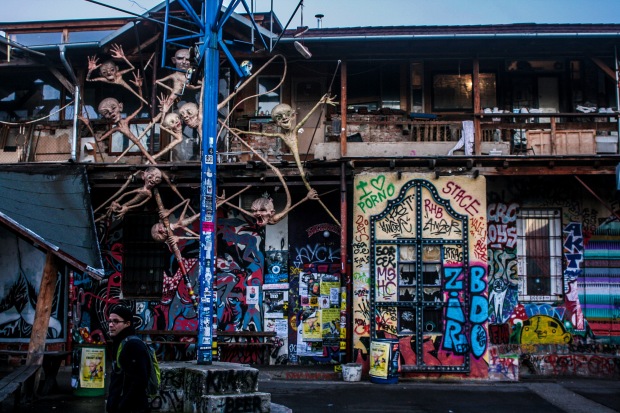 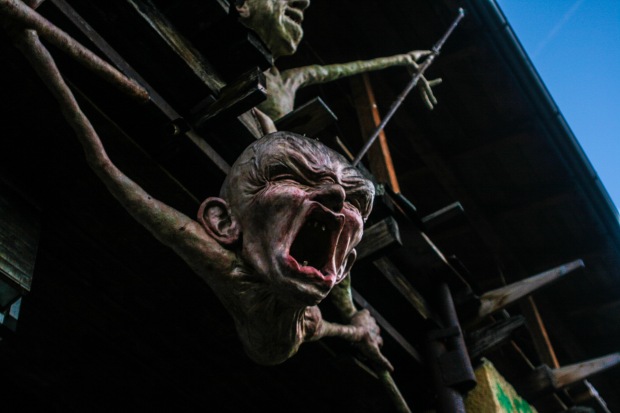 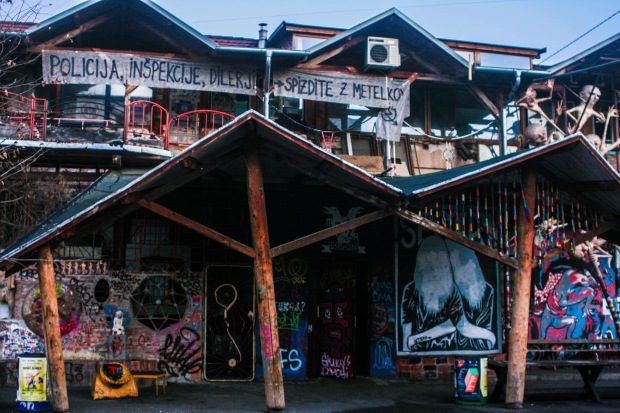 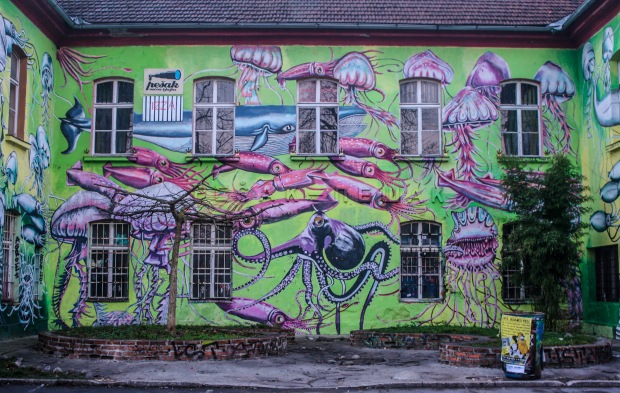 Exploring the alleys of Ljubljana. 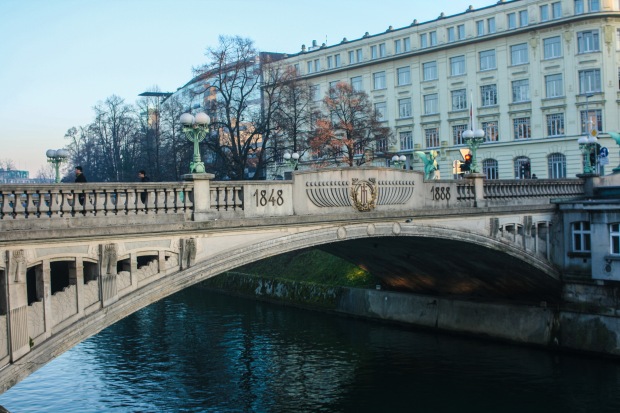 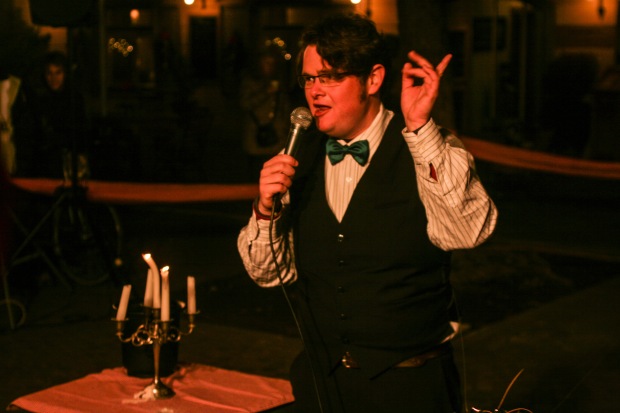 Being serenaded by a Slovenian band in the center of the city.

Passionate singing in the streets. 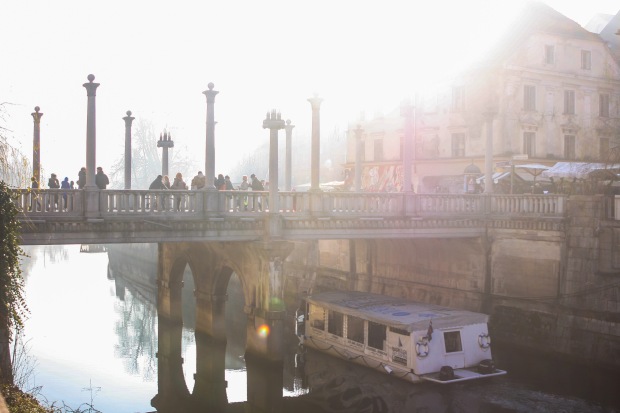 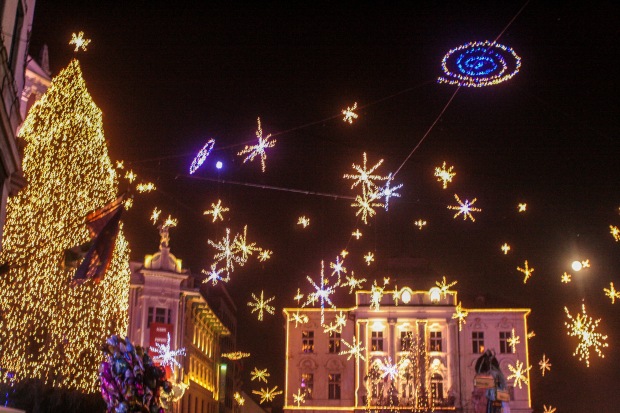 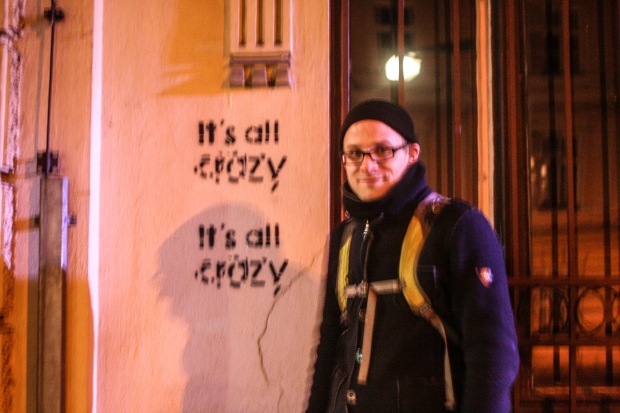 3 thoughts on “Joining the Festivities in Ljubljana”