We spent the last half of April in and around Chiang Mai, Thailand’s second largest city located in the northern part of the country. Our first three days were pure chaos due to the fact that the entire nation was waging a water war against us. A formidable battalion comprised of tourists, expats, and locals alike were armed with water guns, hoses and buckets of ice water for the sole purpose of dousing every single moving body and vehicle that dared to venture outside from April 13th-15th. Needless to say, our defense was untenable. Our clothes remained soggy, our faces forever flooded by a constant deluge of water, and our conversations kept to a minimum by masses of intermittent mobile waterfalls. We were perpetually drenched. The Thai New Year, known as Songkran, is an excuse for the entire country to take a three-day hiatus from all work, responsibilities, and expectations of sanity to celebrate Gaia’s gift of water. The water fight supposedly has spiritual origins– the act of splashing someone with water is said to symbolize the washing away of their wrongdoings. With a cleansed karma on the first day of the New Year, said person is allowed to begin anew with a tabula rasa. For three days, Buddhism became the impetus for drunken recklessness and, thus, every soul in Chiang Mai was promptly absolved of all evil. Unfortunately and predictably, I have no photos to show from these deranged festivities, but at least I still have my $500 camera. 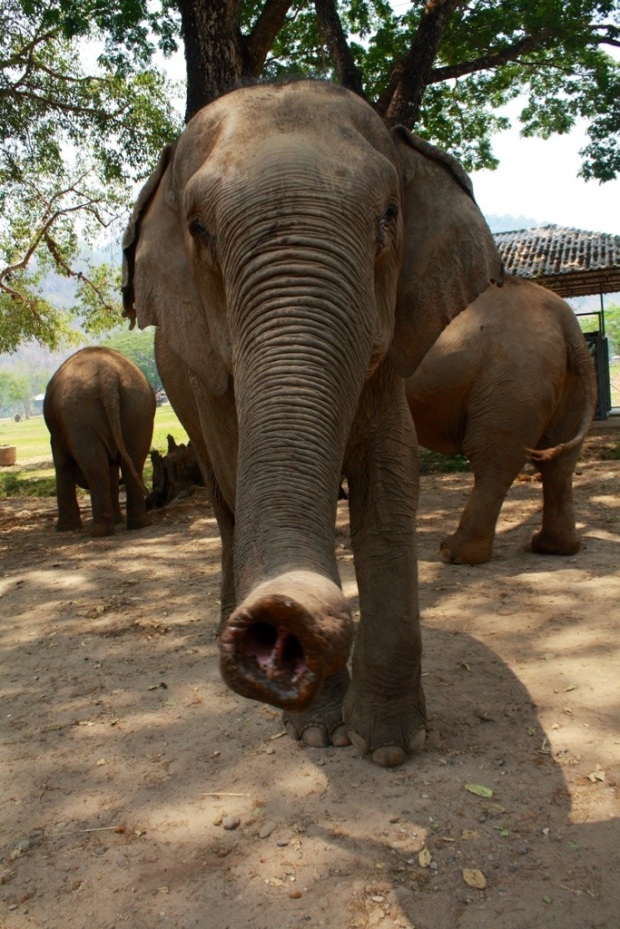 After the water works concluded, I introduced Ryan to some elephant friends and we met the newest addition to Elephant Nature Park, 10-day-old baby Navann. Later I had the pleasure of meeting Lek, the non-profit’s founder and an admirable activist and rescuer of Thailand’s abused elephants.

After recouping we set out for a camping adventure to Thailand’s highest peak, Doi Inthanon. We braved the mountain by means of motorbike, naturally. The roads were steep and treacherously windy, and I just learned how to operate gears on a semi-automatic transmission only minutes before, but I maneuvered that baby like a pro. If I don’t say so myself. Even after getting lost at sundown on a back road with a relentlessly steep decline on an empty tank during a minor hail storm, we made it back to our campsite in good spirits and unscathed. The next day we hiked to the summit, sort of. I made the false assumption that this would be a free hike up a trail from our campsite to the peak. But there are only a few designated trails for hiking, none of which lead to the top of the mountain. I anticipated us roughing it on our own, unrestricted and undirected; but, the trails were isolated, the roads were paved, we were made to pay for a mandatory trail guide, and everything was oddly organized. After we made it to the Gew Mae Pan trail near the summit and one of the trail guards told us “No guide, no go,” I figured the trail must be long, challenging and not visibly marked. I was slightly humiliated, though amused, upon finding that the trail was none of these things and that our trail guide was a petite, 14-year old girl with a pink and blue teddy bear backpack. But, the scenery was beautiful and the air was cool, so who cares if a brisk-paced, mostly mute teeny bopper joins the party. Getting to the summit was another earnest endeavor, as the only way up was by car and we had little faith that our motorbike could carry us both up such a steep incline (or that I knew how to properly change gears to enable us to do so). So we hitchhiked up with a family of six, and we hitchhiked back down with a minivan packed full of 15 squealing teenage girls (plus Dad, the driver) who were only too happy to invite us in. They immediately took pictures with us and stuffed our hands full of candies and Lay’s potato chips. 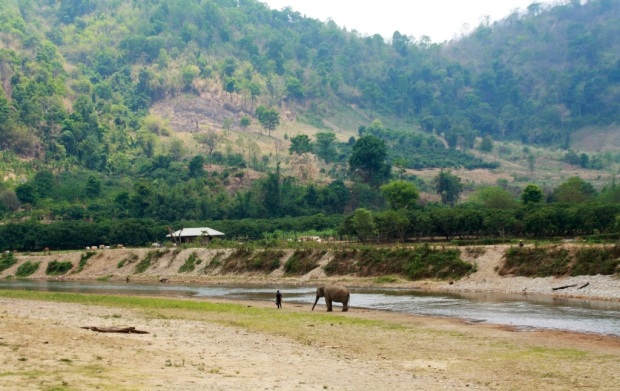 An elephant and her mahout 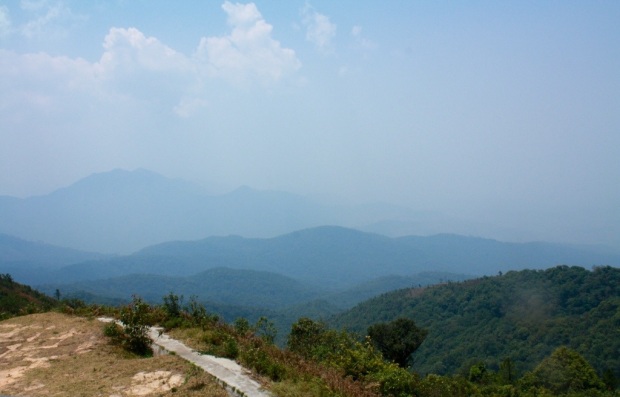 View from the twin chedis near Doi Inthanon’s summit. 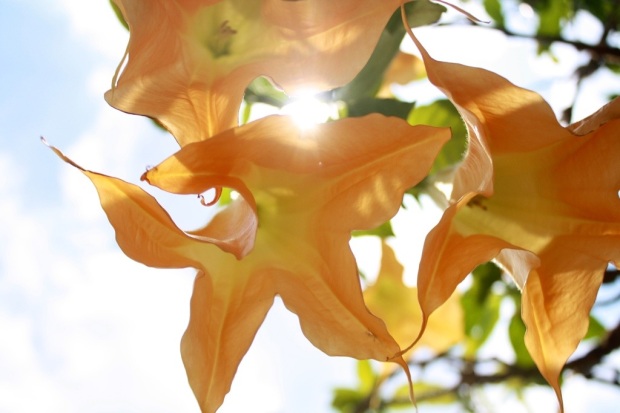 Beautiful flowers in the gardens surrounding the chedis.

These remind me of the dancing flowers from Fantasia

Hummingbird flower in the gardens near the summit. 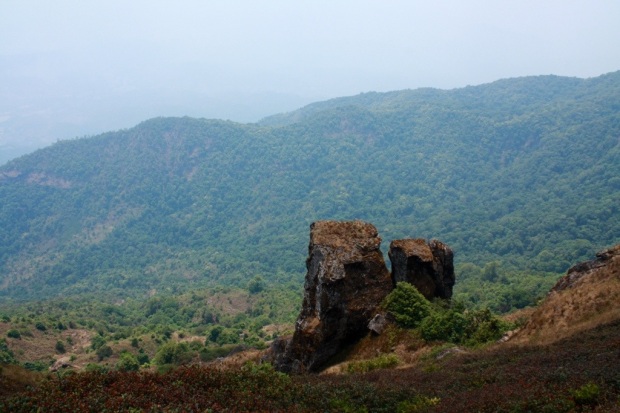 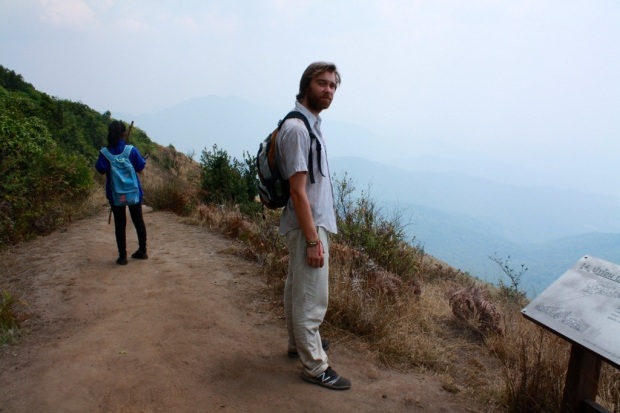 Our burly tour guide and Ryan, not pleased with the situation 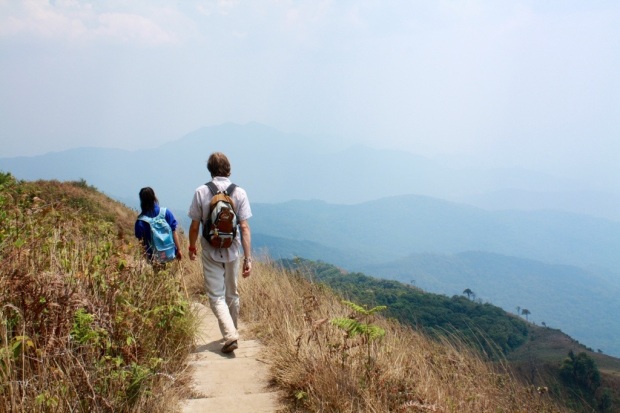 Thankfully, we had a tour guide to show us the way on this well-hidden trail.

Making merit at the peak

Ryan on a trail at the peak 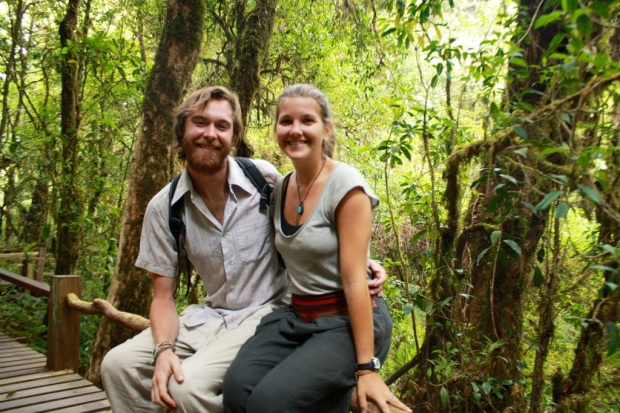 A monkey took our picture 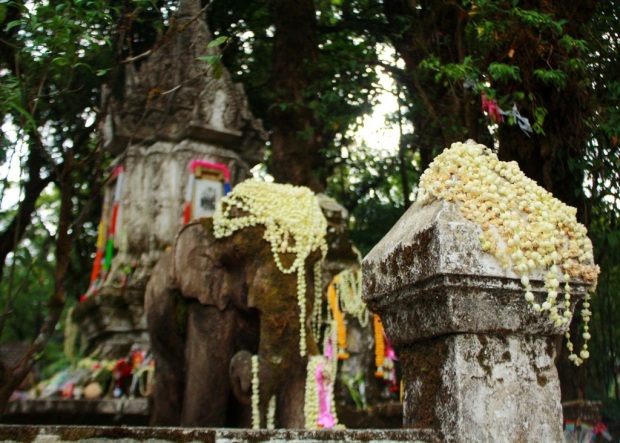 Ryan, a little light-headed from the altitude.

4 thoughts on “The Thai New Year and Mountain Adventures”